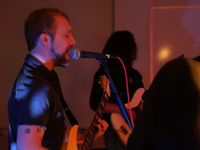 "Every one of these tracks possesses their own story and mystery behind it ... in a way that few bands are able to pull off."

As music has progressed, genre lines have become more and more undefinable and irrelevant. Nightbird Casino is a result of this musical freedom. Formed in Los Angeles in 2017, the band originally consisted of just James Moore (vocals, guitars) and Don Shepherd (guitars, piano, vocals). Signed to Real Quiet Records in 2021, the band relocated to Oregon and the current lineup includes James, Don, Oliver Orion (drums), Patrick Manville (bass), and Amanda Moore (keys, ondes martenot) The fivesome brings together a wide array of influences and inspirations to create something mesmerizingly fresh and unique.

Nightbird Casino is known to let the music take its own journey regardless of the “norm.” Improvisational jams develop into complete songs with the musical muse being the only true guide. All band members are multi-instrumentalists, bringing a vast array of talents and ideas to the table with every song. Having all of these skills at their disposal allows the music to truly be limitless.

Their diversity allows for Nightbird Casino to maintain a sound completely their own. Predominantly dreamy indie-rock, but you’ll frequently catch electronic, neoclassical, and jazz sounds making appearances in their music. Influences for Nightbird Casino are as diverse as the band members themselves, allowing them to marry sounds together to create something wholly refreshing to listeners. Radiohead,  Modest Mouse, King Krule, Interpol, Hum, M83, The Beach Boys, and Nirvana are just some of the major inspirations that led to Nightbird Casino’s eclectic sound.

To date, Nightbird Casino have released two EPs, four singles, and two albums; 2020's Gregorian Nap and 2021's Russian Carpet. They are currently working on a third album with a release date in late 2022.

“Experimental to their very core, they defy the norms. This is not simply experimentation for experimentation’s sake however; it is imbued with a very real emotional core. Over the album they bring in poetic lyricism that celebrates the unexpected twists of the instrumentation. Much of the album has an aching yearning for an absolute freedom...” - Beach Sloth

“You rarely hear an album that combines so many musical influences and styles at once. With 'Gregorian Nap' the American indie rock duo Nightbird Casino ... has created a true masterpiece.”

“"Nightbird Casino keep things creative yet comfortable somehow, branching out into arena style shoegaze whilst offering a simpler, calming quilt of understanding for the more indoor, ambient music fans out there."” - Rebecca Cullen